Stepping away from the Melbourne scene, the Real Songwriters of Melbourne team have been fortunate enough to work with and assist seasoned Canadian singer-songwriter North Easton on his journey into the Australian music scene.

Having played his first ever show in Australia at The Workers’ Club last week, North is our featuring guest at the inaugural RSOM song writers workshop. With years of experience as a song writer, and an impressive list of accomplishments, we have no doubt his expertise and knowledge will enlighten and inspire up-and-coming Melbourne artists.

We managed to catch up with him for a quick chat, to discuss his first impressions of Melbourne, and what it takes to become an established songwriter.

J: Hey North, welcome to RSOM! If you don’t mind, I’ll just get you to start the interview off by giving me a bit about your background?
N: “I’m a son of a welder and stay at home mom in a small little town on Vancouver Island in British Columbia Canada. I turned to music as an escape from the mounting challenges in my world. Song writing started immediately, even as young as 6 years old I was making up my own songs. They (the songs) seemed great at the time, but of course looking back, they were pinnacle in the channelling of emotional release through lyric and melody.”

J: How did your music journey begin?
N: “My new music journey, the one that truly started me on the path happened after my son was born. As I had a couple times in my life before, by the time I turned 17, I needed to find a vent for the build up of things in my life that I seemingly could not control. I started taking the guitar much more seriously around 19 and put together my first project, which was called Garrity, when I turned 22. By then I had already written over 100 songs..”

J: Do you have a particular method or process you use when songwriting?
N: “Being a teacher of songwriting as well as a student, I am constantly seeking out different directions to come at the process. Lyrics first, Music first, Melody first, Idea all thought out…I circle around all of these approaches. And then sometimes, like lightning, it just hits and I have to grab my guitar and let out whatever has been cooking in my head and heart that needs a life of its own.”

J: Are there any themes you often find yourself writing about?
N: “Although I believe I tap into many, many themes when I write, it is fair to say that for the most part, my music has an inspirational component. Many of my songs have been written as almost pep talks to myself to take the world on ahead of you. I have literally more than 50 songs about getting back up and fighting through the challenges that lay ahead of me.”

J: Who are the musicians that you look up to?
N: “I can’t say that I have ever been a die-hard fan to any musician or writer; however, I am always pulled into a great song- something that covers the gamut when it comes to emotion. Don McLean is one of my favourite songwriters. Adam Duritz, from the Counting Crows, sings with a passion and a feel that I am drawn to over and over again. The soul of Tracy Chapman, and the honesty she releases in her lyrics is truly inspiring. Dave Matthews and his phrasing, as well as his acoustic chops. But, this is a constant evolution for me as I am now writing for and with many artists for their songs and albums and that puts a whole new spin on what and who I look up to.”

J: What is the Canadian singer-songwriter scene like in comparison to Melbourne? How are you finding Melbourne?
N: “So far, I find that Canada and Australia have a very similar vibe when it comes to the scenes. Songwriters are a breed and we are all over the world. Nashville for example is the largest gathering of songwriters I have ever seen, but they all have the same inner heart and hope that brings them back to the page to turn out a great tune. I love Melbourne. Great energy, good vibes, awesome people. Driving on the other side of the road is always a little bit of mind mess, but other than that, I’m truly digging it.” 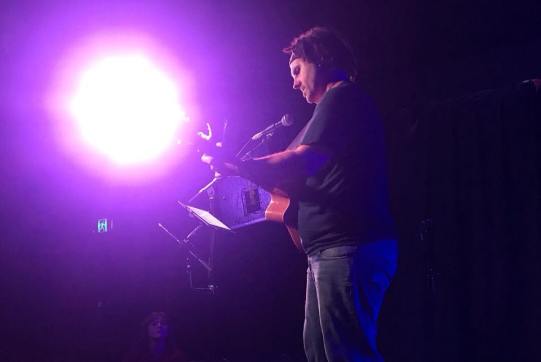 J: What drew you to wanting to come to Melbourne?
N: “A friend of mine from Australia, who tours in Canada, told me Australia was the place to be. So when planning this international tour, I reached out and found that there were many people in the area and beyond who wanted to help me put together this tour. That made it much easier. It’s a long way to come for a month, but I’m only a week or so in and have a ton of amazing experiences so far that will no doubt find their way into future songs.”

J: What was the writing and recording process like for your album One of the Lucky Ones?
N: “When I was choosing the songs for One of the Lucky Ones, I started with over 100. I narrowed that down to 60 songs, and then to 40, and then finally to 25. At that point, I reached out to some close friends and trusted mentors in the music industry to get valuable feedback on the 25 and which ones should make the album. Working with my producer, Jay Lefebvre, on the album was an incredible experience. He was easy going, and very talented.”

J: What has been the highlight of your career so far?
N: “I have been fortunate to play on some pretty cool stages with some huge Canadian stars. I have played in front of 30,000 people, and won over $100,000 in competitions. The highlight for me was when I found out that a bunch of camp counsellors who came to my show once, were singing along to one of my tunes- word for word. They told me afterwards that they sing one of my songs at the campfire to all of the summer camp kids every night before heading to bed. There is nothing bigger than knowing people have been impacted by something you have created.”

J: What advice do you have for up and coming singer-songwriters, such as the ones that will be attending the event this coming Thursday?
N: “My advice is quite simple- continually evolve. Human beings have 6 basic needs in life, with the two most important being contribution and growth. Always give back and help others, and strive to continue growing at what you love to do. Find a mentor, someone who has been down the roads you want to travel on. Chase them, and learn from what they have done to get where they are. Oh, and make sure you love it because of your heart, and not some cloudy dream of financial success. The music industry is a difficult beast to navigate, but song writing is the best job on the planet- in this writers opinion.”

North will be contributing to The Real Songwriters of Melbourne’s first ever songwriters workshop, held this coming Thursday at Wick Studios. The workshop, which has since sold out, will give budding songwriters the chance to work with a knowledgable, experienced songwriter, such as North. For more information about the event, go here.